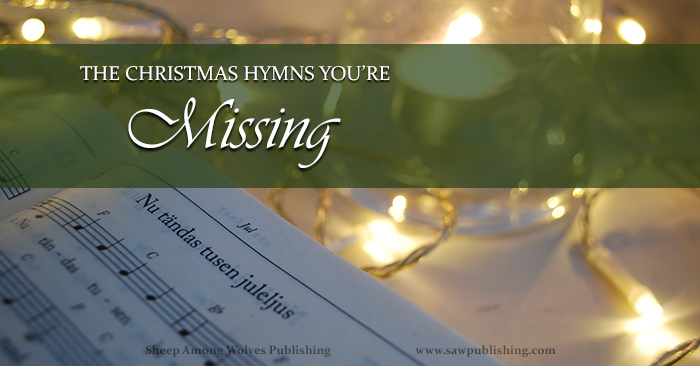 Are there really all that many Christmas hymns you’re missing?

Four years ago I put together a chart of Christmas Hymns Through the Ages, sorting popular Christmas hymns by the era in which the were written. I included pretty much every Christmas hymn I knew, and I came up with a grand total of 24. Smile if you like—but read over the list, and I think you will find it fairly representative of the general body of widely-used Christmas pieces today.

Anyway, just for curiosity’s sake, I took a look at Cyber Hymnal’s Christmas hymn list at the same time, and they offered 755 (albeit theirs weren’t sorted by date). Today I took another look at the same list, and it had expanded to 986, beginning with “Across the Templed Hills” and marching proudly down to “Zion Is Glad This Glorious Morn.” (Both of which, incidentally, were new to me.) 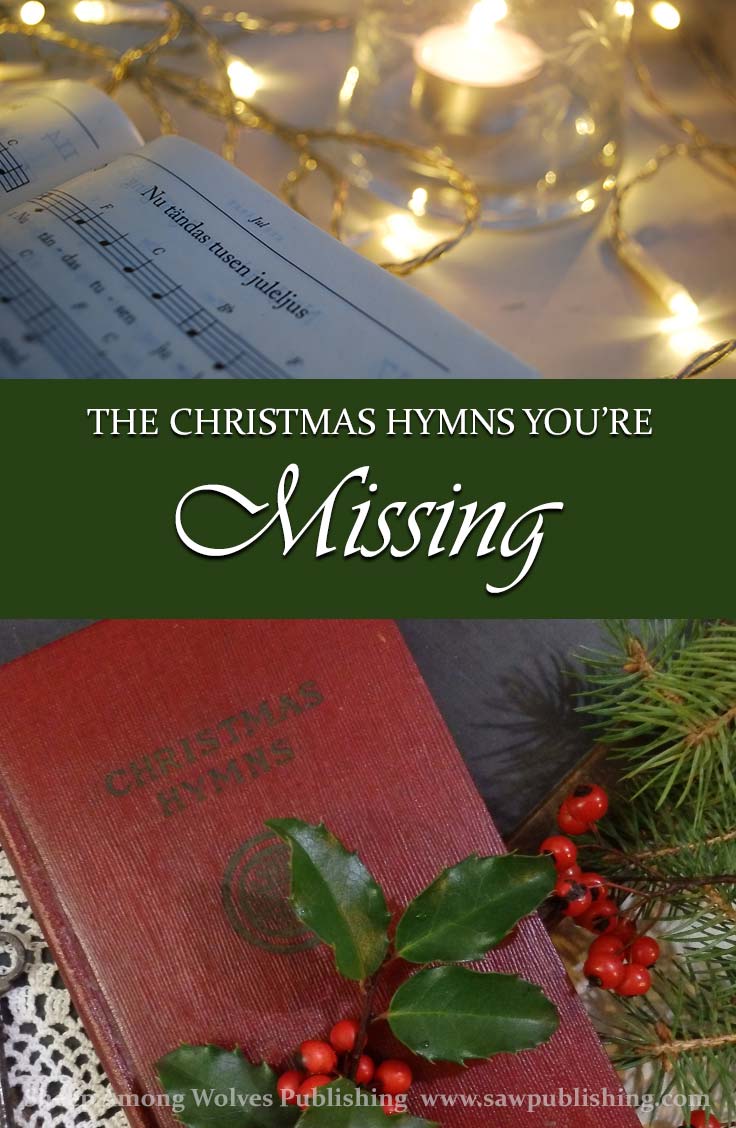 So yes, we are probably missing some Christmas hymns. I felt fairly confident of this fact back in the late summer, when I was coming up with the topics for my fall/winter posts. “The Christmas Hymns You’re Missing.” It sounded like a workable title. Even though I didn’t yet know about the 231 options the faithful workers of Cyber Hymnal had heroically brought to light since I had last looked into the topic.

But when I started to think about this post in detail, one big problem stared me in the face.

You see, these Christmas hymns aren’t missed by everybody. Yes, admittedly, some are more obscure than others. But each person, each family, each church, each culture, is going to be familiar with some hymns which are virtually unknown in other contexts, and vice versa.

If you buy a Christmas CD (a cappella versions excepted, of course) chances are you will get a couple of instrumental pieces. Even CDs featuring prominent soloists frequently include a few. When a given piece occurs time and time again as an instrumental rendition, we easily jump to the conclusion that there aren’t any words that go with it.

Surprisingly, this is often far from the truth.

One hymn which I was surprised to discover last Christmas was “Come, All Ye Shepherds” (Bohemian Folk Song, tr. Mari Ruef Hofer), a tune I was very familiar with as an instrumental recording, but had never before heard sung.

“Jesu, Joy of Man’s Desiring” (Martin Janus, tr. Robert S. Bridges) falls into the same category for many people. The music is a widely-recognised classic, while the lyrics are virtually unsung.

So if you have a familiar (but wordless) Christmas tune running through your head, don’t forget to check whether it truly is instrumental—or whether it just might be one of the Christmas hymns you’re missing.

Last Christmas Eve I came across the single longest hymn I have ever seen included in a printed hymnal. It was in a Lutheran hymnal, and it was by Martin Luther, so perhaps a feeling of respect forbade the compiler to omit any verses, but the stanzas in this astonishing version actually numbered in the mid-teens. I can’t repress a certain mischievous desire to know how many congregations have ever sung it straight through.

Putting aside such extreme cases as the above, it remains a fact that many, many hymnals do not include all the verses to popular hymns. Sometimes, there is a lack of consensus on which verses to leave out—in which case familiarity with several hymnals can provide access to all the stanzas. But in other cases common practice has relegated certain verses entirely to the background. Consider the following two samples:

Where children pure and happy
Pray to the blessèd Child,
Where misery cries out to Thee,
Son of the mother mild;
Where charity stands watching
And faith holds wide the door,
The dark night wakes, the glory breaks,
And Christmas comes once more.

And ye, beneath life’s crushing load,
Whose forms are bending low,
Who toil along the climbing way
With painful steps and slow,
Look now! for glad and golden hours
Come swiftly on the wing.
O rest beside the weary road,
And hear the angels sing!

These two excerpts are actually the little-known fourth verses to the classic Christmas hymns, “O Little Town of Bethlehem” (Phillips Brooks) and, “It Came Upon the Midnight Clear” (Edmund H. Sears) respectively. Both are powerful stanzas, both help to complete the picture the author is drawing, but both are very likely part of the vast body of Christmas hymns we’re missing.

If you want to discover missing verses to well-known Christmas classics, an online collection such as the previously mentioned Cyber Hymnal can be a great place to start. Online collections will frequently contain all extant stanzas and leave the individual user to choose which ones he selects. They also have fewer space limitations than most print versions, so it is easier for them to include long hymns.

And finally, we have the Christmas hymns which have only just appeared in recent years. Christmas tends to be a highly tradition-focused time, so new Christmas hymns don’t always get into circulation quickly, but they are still being written for all that!

“Sing for Joy, You Happy People” (English Text, Crystal Miller, 2017) is a newly released English version of a traditional Latin carol, arranged by Lyle Stutzman. This year is the first Christmas that it has been available, and the sheet music is very reasonably priced ($1.15 USD per copy).

Another Christmas hymn which can be fairly classed as a new release is “Gentle Mary Laid Her Child” (Joseph S. Cook). The popularity of this 1919 Christmas hymn has been hampered by its traditional pairing with the 16th Century tune Tempus Adest Floridum—better known as Good King Wenceslas. Lloyd Kauffman’s new tune Linwood, commissioned in 2010 by the Cliff Brenneman Memorial Trust Fund for the Conservation of Church Music, liberates this century-old text for use in many settings where the previous music would not have been appropriate.

If you are looking for ways to find out about new hymns and church music from an Anabaptist background, I would recommend joining the emailing lists of both these composers to receive updates, sample sheet music, and sample audio files as new pieces are released.

I went back on Cyber Hymnal after completing the body of this post. (Yes, there was a lapse of a few days in there.) I discovered that in my absence, another hymn had been added to the Christmas list. We’re now standing at 987. Possibly, by the time you follow the link, it will 989.

The long and short of it is, there are Christmas hymns you’re missing. It’s just a simple mathematical fact. At this point, if you wanted to get through the whole list in December, you’d have to sing 31.83 hymns a day (yes, I did round up, the actually number had 16 digits).

Probably, that would be overkill.

But surely, even in the midst of a busy Christmas season, we have room for a couple more hymns. Make it a priority this Christmas to discover some of the Christmas hymns you’ve been missing.

Just why is our legacy of Christmas music so precious? Take a look at our previous post: 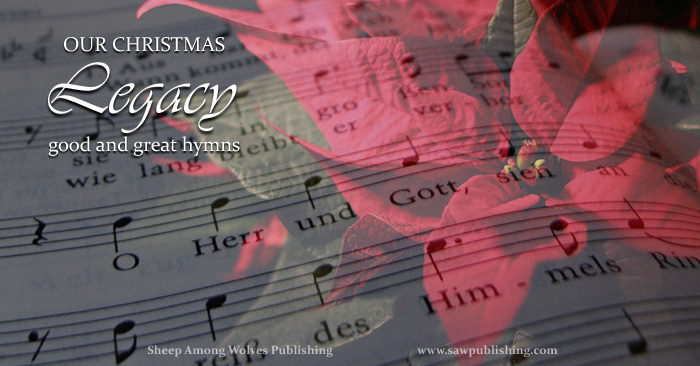 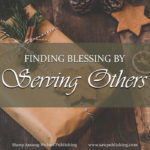 Today’s challenge is finding blessing by serving others. You will find the Spirit of God working in your heart to change your perspective as well. 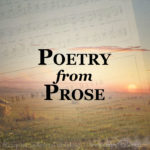 Faithful meterizations of Scripture are the ultimate example of Bible concepts captured in a way that our minds will remember. 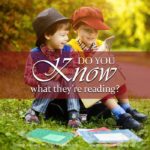 Do you read the books your children are reading? It’s a commitment that takes time and energy, but it’s also one which amply repays the effort!