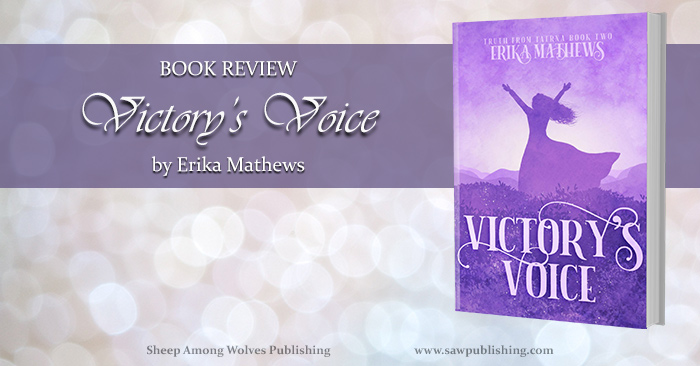 All my life, I’ve heard people say that actions speak louder than words. Maybe they do. But I wonder sometimes if we take that to mean that our words don’t matter at all. That we can say whatever we like and it really won’t count for much. Negative words of others—or ourselves. Statements that aren’t meant to be lies, but maybe aren’t quite true. Even such a simple comment as “I can’t do that,” when we know we actually could.

Recently I read a book that has got me thinking about the words I say and the significance they actually hold the world.

I don’t love reviewing books, but I was eager to read Victory’s Voice, I wanted to get firsthand experience of a launch team and I happened to know the author! So I signed up to read a free copy of Victory’s Voice in exchange for an honest review.

And that’s where the adventure began.

I’ll be honest—as a sensitive reader, I didn’t really enjoy the part of the book where Ellisia was involved with the Applied Physics Team in experiments and “science” that ended up being pretty suspect. It gave me a “weird” feeling to read it, possibly because I have a chronic habit of over-identifying with fiction, and I didn’t like feeling caught up in the midst of something that wasn’t of God. I guess I wish that half of the book had been a quarter of it instead.

BUT—I quite enjoyed the second half and I wished that part of the story could have been longer! (Three-quarters, instead of half, let’s say, so we still end up with a whole book!) Erika is very good at writing likeable godly characters who stretch our understanding of what living for God really means. I also love the way she weaves deep spiritual truths and realities into the characters’ storylines, and how she continually turns the focus back to God.

Victory’s Voice was no exception. I loved how she portrayed God’s power as infinitely stronger than the power of the evil one, and the illustration of the soap-bubble lion was especially poignant in that respect.

Possibly my favourite quote from the book was this:

“Everything recalled the thin volume slipped into the back of Ellrick’s Book: the roaring lion that sought to devour but only had power when people granted him power.”

That was VERY impacting to me. Unless I allow the devil to have power, he has none and cannot hurt me. Jesus has already overcome him!!

The story was also very engaging and kept me interested from start to finish. It was hard to put it down, because it held the suspense so well from the beginning to the end that I was always tempted to read “one more chapter.” 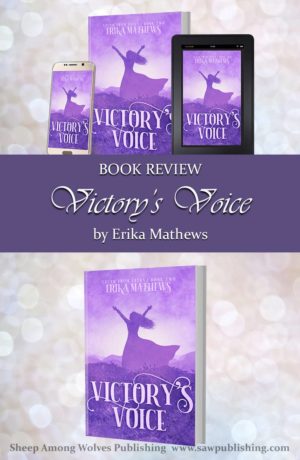 When Ellisia, a seventeen-year-old book enthusiast with a passion for learning and a fascination with words, has the opportunity to attend Academy, she’s elated to further her education as well as live near the Palace BookHall—the focus of her lifelong dream. But as she begins to discover the true power of the spoken word, she faces a choice: join forces with a foreign scientist or relinquish her dreams of someday working in the BookHall. As the scientist’s projects begin to threaten the safety of Ellisia’s family, she’s torn between her loyalties and her ambitions. When impending crisis brings a clash of spiritual kingdoms, Ellisia must once for all choose how she’ll harness the power of words. Spoken words transcend her reality, uniting heavenly with earthly and commanding the forces that drive the physical world, and Ellisia’s voice will be the catalyst for sure defeat—or decisive victory.

Unlike most reviewers, who use either a five- or ten-point system, at Sheep Among Wolves we have adopted a comprehensive 100-point system with a clear breakdown of a book’s areas of strength and weakness. For a more thorough explanation of this system see our introductory post.

There is no romance per se in the story. A teenage girl and her ten-years-older male friend have a brother-sister relationship that involves one hug but is never treated as romantic. On a journey they stay the night alone in a two-room hut, but nothing inappropriate occurs.

A girl is asked to act out scenes for an eccentric writer who caters to the public taste with content that is “exciting—and morally questionable.” This issue arises several times, but is delicately hinted at and never described, and the girl refuses to participate.

The struggle between the invisible spiritual kingdoms is portrayed with a vividness that may be disturbing to the sensitive—especially before the main character learns to recognize and shun the powers of darkness through the greater power of God.

The expression “What in Taerna” (the name of the fictional kingdom of the story) is used, probably in place of “What on earth”.

A group of impoverished, non-Christian citizens are portrayed as smoking.

This story is written from a conservative evangelical position with an emphasis on the kingdom life.

The characters in this fictional world use the name Adon Olam for God. While I personally prefer not to use a different name for God, it made me a lot more comfortable to discover that the name is a Hebrew transliteration meaning “Lord of Eternity”.

A girl gets deeply involved in an advanced branch of “science” called “wordology” that involves some weird and questionable practices. This is later denounced as occult, and the greater power of words spoken for God shown as triumphing over the evil one.

There are several instances of a girl’s words coming true after she has spoken them, and it is kind of confusing whether or not this is meant to be of God.

A woman takes a leadership role in a worship service after an interruption results in her pastor husband’s absence.

Victory’s Voice—A Challenge in Our World

In the end, Victory’s Voice was a powerful story that felt a little too vivid at points in portraying the wrong side of a very real struggle between light and darkness, God and the devil.

I think I will be pondering its lessons and truths for a long time to come. How much do I actually think of the significance of words before I speak them? How often do I remain silent and allow evil to be victorious simply because I refuse to speak the words that will send it fleeing?

Most of all—how often do I pause to remember that evil is never stronger than good, and that darkness can never overcome light.

I said earlier that my favourite quote was about the devil having no power if we don’t give him any. It probably is my favourite. But there’s another one that I love almost as much:

Looking for reviews of other recently released Christian novels? See our review of Jayne’s Endeavour: 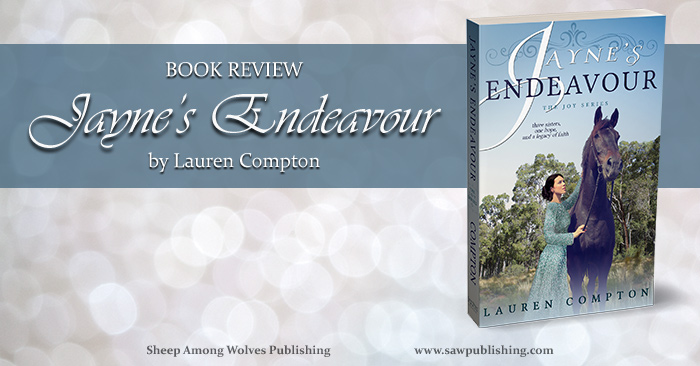 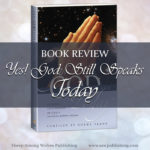 Have you ever wondered if God still speaks today? And if He does, if He speaks to weak, struggling people like you and me? Yes! God Still Speaks Today is a powerful account that highlights God’s hand in the ordinary and small as well as the extraordinary and big events of our lives.

How much does literary excellence matter? Are great books really important? And if so, why? 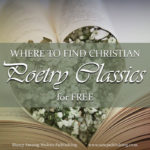 Are you looking for well-written, Christ-centred literature to include in your homeschooling curriculum? SAW Publishing’s FREE collection of Christian poetry classics is a great place to start!