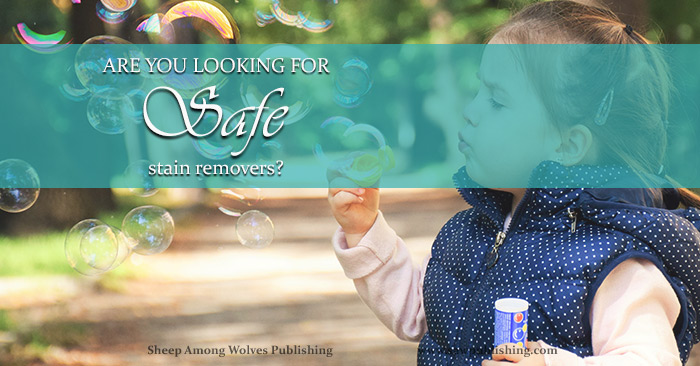 Have you ever used a stain remover that ate a hole through your shirt?  It’s happened to me, and I’ll admit I was inclined to blame the stain remover.  It obviously wasn’t “safe” for clothing.

But one 1920’s housekeeping book suggested a different explanation.  A Manual of Home-Making compiled by Martha Van Rensselaer, Flora Rose, and Helen Canon, devotes an entire chapter to discussing stain removal – not only describing treatments for individual stains, but entering into the chemicals which are used for stain removing:

“A first step toward gaining necessary knowledge of laundry methods is to learn something of the nature of the fabrics to be laundered and how they respond to the cleansing agents or solvents generally used in the laundry.”

This is the kind of chemistry that we should be teaching in our homeschools!  Chemistry which is directly related to daily life, and will have an impact on our students even after they leave school.

1) What Is Your Stain Remover Made Of?

“Among the common laundry cleansing agents, called reagents, are two classes of chemicals known as acids and bases, or alkalis.”

– Ammonia and Cloudy Ammonia (a mixture of ammonia and soap)

2) How Will A Stain Remover Effect Your Fabric?

Synthetic fibers, in the early 1900’s, were only beginning to make their appearance on the market, so that natural fibers made up the bulk of clothing worn.  These fibers can be divided into two classes:

Understanding what fibers clothing is made of, and the effect which different chemicals have on those fibers, is the key to choosing stain removers that will succeed.

(And likewise the key to choosing stain removers which will not eat a hole through the fibers of your shirt!)

When You Don’t Have Any Choice

Sometimes it is necessary to use acids or alkalis, even on fabrics which are liable to be damaged by them.  The effect of a chemical can be neutralized:

a) By thorough rinsing in water – especially for weak alkalis, this is often the only treatment necessary.

One fascinating trait of the lemon juice solution is described by the authors of A Manual of Home-Making:

“Squeeze the juice on the stain.  As long as the spot remains alkaline the juice is a bright yellow in colour, but when the spot becomes acid the color disappears almost entirely.  Apply the lemon juice until this color change takes place.”

This “laundry work” would make a great science experiment, as well as the perfect opportunity to tie chemistry into daily life.

3) Is Your Stain Remover Safe for the Stain Itself? 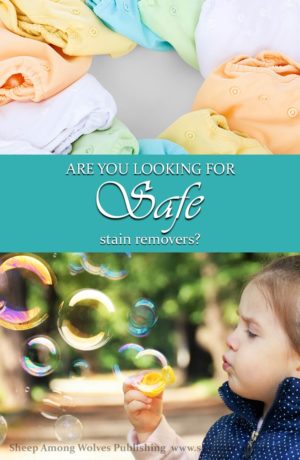 “The nature of a stain should be known, if possible, before its removal is attempted, since this determines the treatment to be adopted.  Moreover, if an unsuitable stain remover is used, the stain may be “set” so that its removal becomes difficult or even impossible.

“For example, if hot water, which easily removes most fresh fruit stains, is applied to stains containing protein, such as stains of milk, blood, eggs, or meat juice, it coagulates the albumin in the fibers of the cloth and makes it extremely difficult to remove.  Similarly, soap, which aids in the removal of grease spots, sets many fruit stains.”

“In cases in which the nature of the stain is not known, it should be attacked first by sponging with cold water, provided, however, that the fabric would not be injured by water.  If the stain is not removed by cold or warm water, chemicals should then be applied.  Often the behaviour of a stain, when treated with cold water, will give some indication of its nature; for example, a grease spot will not absorb water.  Hot water should be avoided in treating unknown stains until after other substances have been tried, since hot water will set many stains and make their removal more difficult.”

“Chemicals should not be used until water or laundering has been tried, for they attack the fibers of the cloth as well as the stain.”

Exploring The Legacy Of Stain Removers

I have always thought of stain removing as a modern concept.  I imagined that people in the past had just scrubbed their clothes with soap, and hoped for the best.  (Unfortunate for fruit stains, as we discovered above.)

In fact, historical housekeeping books reveal that stain removal has been a topic of study for generations.  Discoveries in chemistry may continue to change the individual methods we use.  Chemicals now recognized as dangerous can be avoided.  But the foundational principles are still the same.

This post has been an overview of how chemicals work with fabric.  To take a look at specific methods for some of the stains every homemaker is plagued with, take a look at last week’s post: 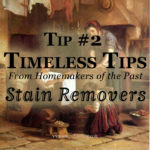 Unless otherwise referenced, the quotations in this article were taken from A Manual of Home-Making by Martha Van Rensselaer, et al., who had in turn reprinted a significant part of their stain removal chapter from Farmers’ Bull. 861, Removal of Stains from Clothing and Other Textiles by Harold L. Lang and Anna H. Whittelsey of the U.S. Dept. of Agriculture. 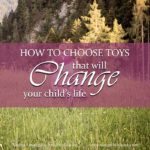 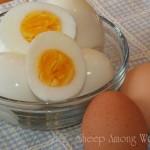 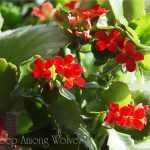 This post has been shared on The Art of Homemaking Mondays linkup.

2 thoughts on “Are You Looking For Safe Stain Removers? – Timeless Tip #3”