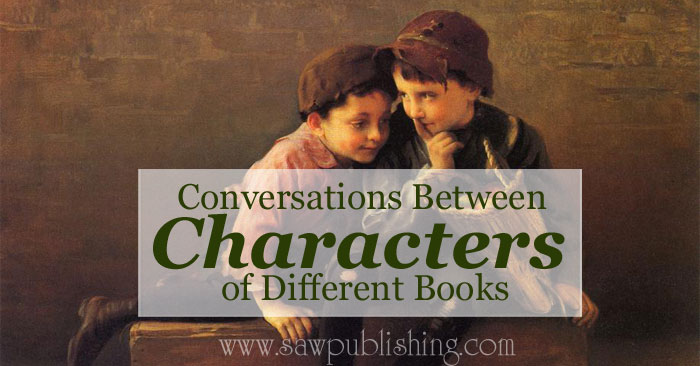 What if Reuben Stone from A Charge to Keep was walking down the street one day, and saw a young organ grinder?  Suppose the boy held his organ carefully, as if it were a priceless treasure, and slowly turned the handle while the tune “Home, Sweet Home” rang across the street.

If you have read both A Charge to Keep and Christie’s Old Organ you would probably give a delighted laugh, and quickly turn the page to see what was coming next.  It is just so much fun to find the characters of a favorite book come tumbling into the middle of another favorite book.

Conversations Between Characters A Logical Impossibility?

Of course, the scene we’ve just described above isn’t very likely.  We might almost say, it is impossible.  Christie’s Old Organ and A Charge to Keep were written by two different authors, neither of which are still living.  To the best of my knowledge, the story just doesn’t exist. 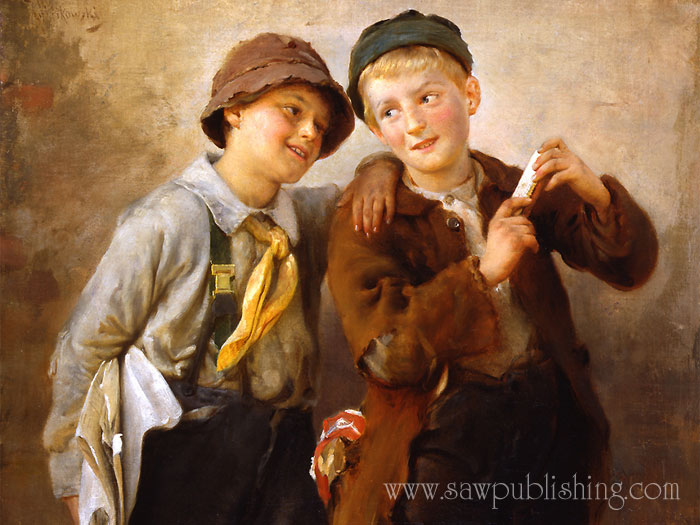 And so, an idea grew up in my head.  It was not a complicated idea, really.  But it required some planning if it was to be carried out.

I wanted to write a scene in which characters out of three different books were shown in the same room having a simple conversation.

The greatest difficulty was that each character was written by a different author with a different “voice.”  If you try to write a conversation, you may be able to capture the flavour of one of the characters, but you are likely to lose it again as soon as the second has to speak.  On the other hand, you can’t just sit down and write only one side of the conversation, because in real life people respond to each other’s comments.  You can’t do this if you don’t know what the second character’s comments are going to be.

The simple solution is an outline.  If you know what the substance of each remark is supposed to be, you can write the whole of the first character’s part, then go back for the second, and the third.  It may sound difficult, but it really isn’t. By following the outline available at the end of this post, you can create your own conversations between any characters you like.

This is a fabulous school project for literature or history.  It gives students practice in observing characters and writing in a specific style.  Don’t worry if the result doesn’t sound like a masterpiece.  The more you practice, the better you will become, and even at the beginning it will be delightful to fill a room with your favorite characters, and watch them interact.

How To Use The Outline

At the top of the outline page, you will see several lines that need to be filled out before you begin writing.  These include choosing three characters to figure in the conversation, as well as a few other places and objects which will be mentioned during the sketch.  This is a great way to include younger children in the activity.  Even if they won’t be writing the conversation, they can help pick the location, and other features that will be included in the story. 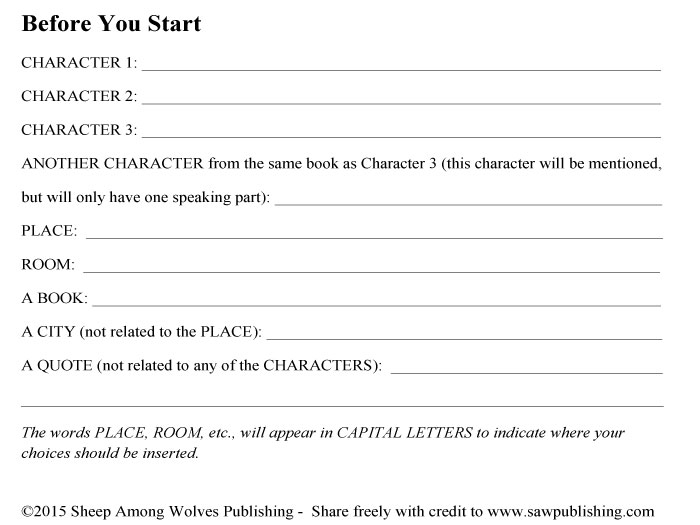 After these preliminaries are settled, the writing begins!  Start with Character One, and work through the outline writing all the comments which are labeled with this number.  If you can’t think of a characteristic comment, try looking in the book the character is borrowed from.  What did that person say under a similar situation?  What phrases and expressions were typical of their way of talking?

Don’t worry if it isn’t perfect.  And don’t be afraid to borrow whole sentences directly from the book.  If they fit the outline, then use them.  You aren’t publishing this material and you’re not claiming it as your own, so you don’t need to be worried about copyright.  Sentences your characters “really said” will add a delightful touch to the scene!

Once you have finished Character One’s part, go back to the beginning of the scene, and write Character Two, and then Character Three.  If you have more than one student working on the project, you might like to assign a single character to each student.

Which Characters Will Work?

Ultimately, any character can be used for this type of story.  If you are doing the activity as part of a history course, you may want to limit yourself to characters from roughly the same time period.  Then again, this is a great opportunity to compare figures from different eras by imagining them in the same room, despite discrepancies in dates and geographic locations.  This activity can be done with any characters that can speak, but here are a few pointers that may help your writing to get off to an easy start:

The more unique a character is, the easier they typically are to write.  Characters who have distinctive speech patterns, decided viewpoints, or unusual phrases are rewarding to copy, because they have a strong, unique voice.  This doesn’t mean that they have to be particularly outgoing characters.  They just need to be distinct from other characters.

Finding Characters Who Work Together

Another point to keep in mind, is that you want your three characters to contrast with, and complement each other.  If Character One is a bouncy, outgoing personality, Character Two might work well as a calm, easygoing individual.  Or as a careful, methodical person.  Or as a shy child, impressed by Character One’s energy.

The ideal group of characters lets you highlight each person’s characteristics, and uses characters that stand out, not only by being clear, recognizable personalities, but also by being different from each other.  This makes your three characters easier to write, and also easier to read.

Where To Look for Characters

As I mentioned above, this exercise is not limited to fictitious characters.  Historical characters would work equally well, especially where you have access to a large body of speeches, letters, or autobiographies.  The more the character has “said” the easier it will be to create a lifelike scene.

You don’t even need to be necessarily limited to prose.  Characters talking in rhyme might sound a little odd, although that’s okay too, if you want to use it.  But by altering the word position of a few lines of poetry, you can make it conversational, while still maintaining the flavour of the poet. 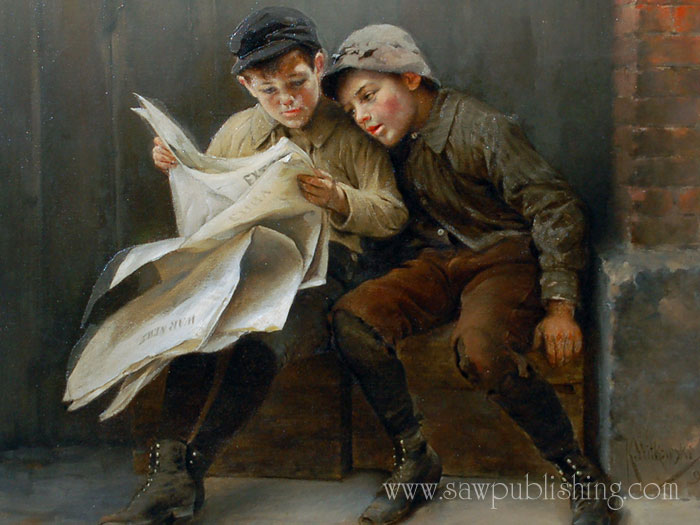 It’s Not That Hard!

Writing can be intimidating.  You may think, “I love reading that author, but I could never write like them.”  Maybe not.  Very few writers are exactly alike, and skillful authors have had years and years of practice.

Copying characters from talented authors and great books may seem a little presumptuous, and more than a little difficult.  But don’t forget, it is really easier than creating your own characters.  The author has already done all the developing.  They have already made you acquainted with the character, and exactly what they’re like.

Can’t you picture a comment which was precisely what your favorite character would have said?  And wouldn’t the grandmother out of another book have had an opinion on that subject, too?  Not to mention the funny view the quaint little child out of a third story would have expressed?

Give it a try.  Write it down.  The outline isn’t difficult to follow, and you’ll get better every time you practice.