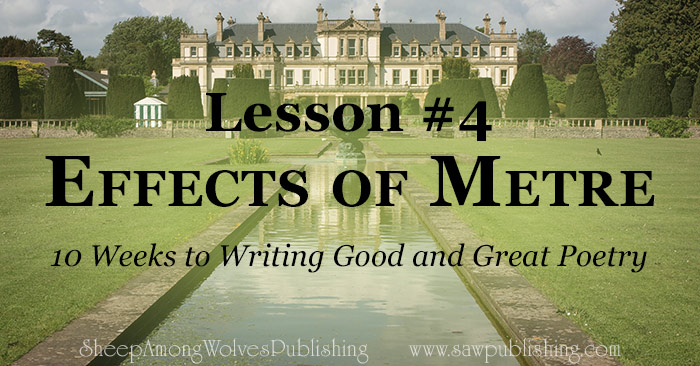 Did you ever think about the effect which metre has on a poem?  Did you ever come away from reading someone else’s poetry, and think, “I really liked the thought, but it flowed kind of awkwardly?”  Or, in writing your own poem, did you ever start on the first few lines, only to try again with shorter lines, or a different rhythm, because you didn’t like the way it sounded at first?  We can often have an intuitive sense that something about a poem isn’t quite right—that it doesn’t flow well, or the rhythm is too bouncy for so serious a theme—and that intuition can help us in choosing the right metre to use in our poems.

Metre is quite simply the structural pattern which holds a poem together.  It is the number of syllables in a given line, and the emphasis placed on each of those syllables.  It’s very important in writing great poetry to be sure that the emphasis placed on each syllable is natural and does not disrupt the ordinary pronunciation of the word.  For example, the emphasis in the word “amazing” is usually given to the middle syllable (am-A-zing).  In the hymn “Amazing Grace” observe how the metrical pattern which emphasizes every other syllable, beginning with the second one, perfectly suits the natural pronunciation of “amazing.”  If we pay close attention to how our chosen metre affects the words we use, it will greatly improve the flow of the poem.

Different poems employ different metres, lay the emphasis on different words, and provide different tones.  Certain patterns of emphasis can add to or take away from the tone of a poem.  Take a look at the metre of “Let All Things Now Living.”

1 Let all things now living
A song of thanksgiving
To God the Creator triumphantly raise,
Who fashioned and made us,
Protected and stayed us,
Who still guides us on to the end of our days.
His banners are o’er us,
His light goes before us,
A pillar of fire shining forth in the night,
Till shadows have vanished
And darkness is banished,
As forward we travel from light into light.

2 His law he enforces;
The stars in their courses
And sun in its orbit obediently shine;
The hills and the mountains,
The rivers and fountains,
The deeps of the ocean proclaim him divine.
We too should be voicing
Our love and rejoicing;
With glad adoration a song let us raise,
Till all things now living
Unite in thanksgiving:
To God in the highest, hosanna and praise!

See how the emphasis comes every three beats instead of every other?  In some poems, this metre can sound quite sing songy—even irreverent at times—but in this hymn it serves to highlight the double syllable rhyme at the end of a number of the lines.  Notice also, that this is a very tricky metre to use, because our natural speech-patterns don’t work that way.  See if you can spot a few places where this metre gives an awkward emphasis to a word or syllable.  (Hint: the most obvious ones come in lines one and six of verse one, and lines seven, eight and ten of verse two.  However, these are only apparent when you read the poem—the tune shifts the emphasis to a smoother sound.)  You can see why this is a more unusual metre, because of its complexity, and how this hymn makes good use of its natural strengths.

Some lines in poetry are longer than others, often depending on just what message the author wanted to convey.  Sometimes a complex thought is better expressed in long lines, to avoid being tied down by the rhyming words.  Other times, fairly short lines can produce a precision of expression which makes the thought seem more decisive.  In “Praise to the Lord, the Almighty” we find some of the longest lines you will come across in poetry, at fourteen syllables.  The metrical index in my hymnal contains lines of fifteen syllables but no higher.  You can see by this that these lines are very long, but look at the effect this has on the hymn.

“Praise to the Lord, the Almighty, the King of creation!
O my soul, praise Him, for He is thy health and salvation!”

See how much freedom it gives the author to express thoughts which are difficult to confine to shorter lines?  This is especially important in this hymn, because the “author” in this case was translating from German to English!  Imagine if she had needed to worry about shorter lines and more complex rhyming patterns!

Now take a look at the later lines:

“All ye who hear,
Now to His temple draw near;
Join me in glad adoration!”

These lines illustrate the precision I mentioned above, and give a more concise tone to the latter half of each verse.

There are certain metres which are more common than others, because of their simplicity and fairly neutral effect on the tone of a poem.  If you take a look at the metrical index in the back of your hymnal, you will see that eight syllable lines are extremely popular in hymn-writing.  This is because eight syllables come out even and reasonably long, when you emphasize every other beat, as is most common in poetry.  Metres of this type don’t affect the tone of your piece negatively or positively—they just are.  This is very helpful if you have a complicated idea or point to express, and wish to be as little hampered as possible by your metre.  “Amazing Grace,” our example from above, was written to the most common of all metres (8.6.8.6.)—so common that it was named Common Metre!  Our familiarity with this metre frees up our minds to consider the substance of the piece, even though it doesn’t particularly add to the tone. 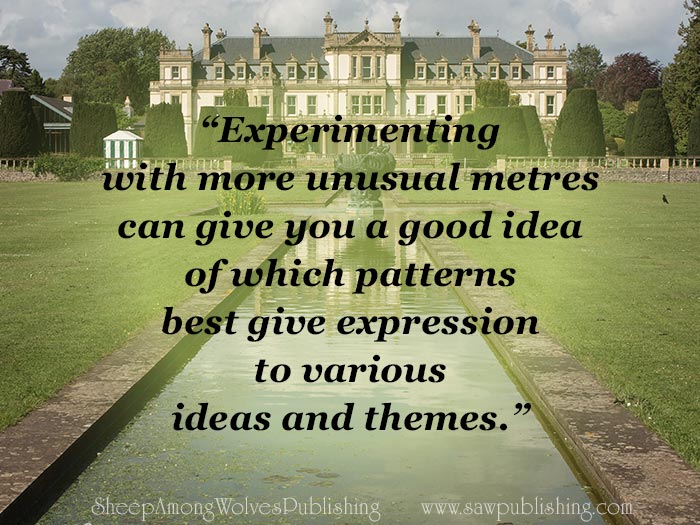 Experimenting with more unusual metres can give you a good idea of what patterns best give expression to various ideas and themes.  Common metres can get mundane.  If you have written much poetry at all, you may have wished for something more exciting—or perhaps you didn’t realize there was something more exciting.  Irregular and unusual metres can provide a challenge for amateurs and experts alike.  There was one poem of my own [insert link to  “On the Seas of Life”], where I unintentionally and unwisely fell into a complicated metre.  Three of the six lines rhymed with each other, and two other lines each had a rhyming word in the middle and at the end of the line.  This worked very well for three or four stanzas, and gave the poem a nice ring, but as the entire piece grew to twenty-one stanzas, I ran into considerable difficulty!  That being said, writing that poem was much more interesting than many I have written with more simple metres.

Metre really does matter.  Singlehandedly, it can change the impression which your reader takes away when they read your poem.  It can mean the difference between them saying, “What a fabulous piece of poetry!” and coming away with the feeling we mentioned above—”Well, it was a nice thought, but I’m really not so sure about the flow.”  Great metres, which are well suited to your poems, will bring the reader away impressed—whether or not he agrees with you.  I encourage you to study different metres, and try them out yourself.  You’ll find that it has a positive effect on your poetry.

This post may have been shared with the following linkups: The Art of Homemaking Mondays, Monday’s Musings,  What Joy is Mine, The Modest Mom, Homemaking Wednesdays, Wise Woman Linkup.
You might also like: 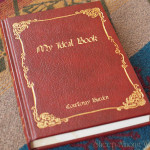 What are the qualities which make you love a great book? 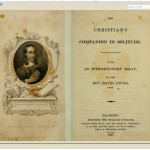 Digital archives are a great place to search for books that are out of print. 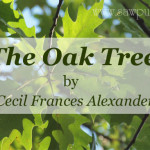 Children like to memorize poetry which is easy to recite, and contains a lesson or object they can understand.