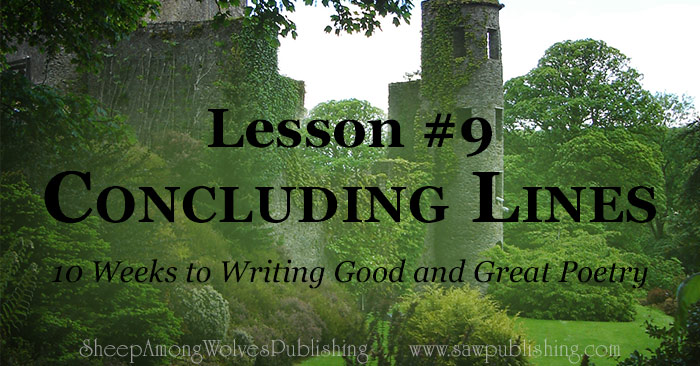 Ending a poem strongly is like running well the last stretch of a race.  If you were not in the lead before, it gives you a last chance to win, and if you were in the lead, it assures you victory.  In the same fashion, a strong conclusion in poetry gives you one final opportunity to impress your reader with whatever you wanted to say.  If your last lines are strong, that is the impression people will carry away with them.  And incidentally, those same lines will act almost like a preface to your next poem.  The reader will have a greater desire to hear your poetry again, if they were favourably impressed the first time.  And that’s why concluding lines are so important.

One way of achieving a strong ending is to make the last lines a fulfillment of the first lines—a statement that builds on your opening one and ties together the poem as a whole.  A good example of this is found in the hymn “Glorious Things of Thee Are Spoken.”  The hymn begins by speaking of the gloriousness of Zion, the city of God, and the first three verses continue to describe all the blessings with which it is surrounded.  The final verse makes the blessings of Zion a personal interest for us.  Take a look at the first and last verses printed below.

“Glorious things of thee are spoken,
Zion, city of our God;
He whose Word cannot be broken
Formed thee for His own abode:
On the Rock of Ages founded,
What can shake thy sure repose?
With salvation’s walls surrounded,
Thou may’st smile at all thy foes.

Saviour, if of Zion’s city
I, through grace, a member am,
Let the world deride or pity,
I will glory in Thy name:
Fading is the worldling’s pleasure,
All his boasted pomp and show;
Solid joys and lasting treasure
None but Zion’s children know.”

The hymn ends on such a satisfying, triumphant note, telling us first that we belong to Zion—whose glories have been detailed above—and then, that none but Zion’s children know solid joys and lasting treasure!  See how those last two lines tie back to the opening verse, and build upon it—fulfilling it, and bringing it to a joyful and victorious conclusion.  This technique is especially prominent in hymn-writing, because the whole of the Christian life is taking everything a step farther.  After the blessings of earth, there are always the blessings of heaven.  As with any thought which has been used frequently, we do need to find an original way of expressing it, but that is precisely what this hymn does, finding a new way to express the idea that the Christian life is infinitely more fulfilling than any earthly satisfaction.

Contrasting with the First Lines

A similar technique with a different slant to it, is to contrast the beginning and ending thoughts.  Using the last lines to recollect your opening and say, “Not like that, but like this.”  We see this device used in “Once in Royal David’s City.”  Because it is a Christmas hymn, the body of the piece focuses on Christ’s first coming to earth as a baby in the manger, but in the last verse the author writes,

“Not in that poor lowly stable,
With the oxen standing by,
We shall see Him; but in heaven,
Set at God’s right hand on high:
When like stars His children crowned,
All in white shall gather round.”

In this case it is a contrast between how the earth saw Jesus at His first coming, and how we as Christians shall see Him when he comes again. There is an element of fulfilling in this verse as well, in the sense that Christ’s first coming is not complete without His second coming.  Notice also, that the whole stanza is the strong ending here, rather than just the last couple of lines, which is perfectly acceptable as long as the last few don’t detract from the rest of the verse.

Concluding with a Chorus

When a hymn, or occasionally a poem, has some kind of refrain or chorus, it is the chorus that needs to end strongly.  There is a temptation to allow the chorus to be a little bit weaker than the rest of the hymn, but this has serious implications in the last verse.  Ending strongly with a chorus is also important because of its repetition.  If you have a six-stanza hymn, your chorus will be sung six times—so it had better be worth hearing!  Take a look at the chorus for “Thine is the Glory,”  which does an exceptional job of building momentum rather than losing it with repetition.

“Thine is the glory, risen conq’ring Son,
Endless is the victory Thou o’er death hast won.”

That, in a nutshell, is the essence of the hymn, captured in only two lines.  That is what a good chorus should be—an abstract of the strongest thoughts in the entire poem, repeated at the end of every verse to add power and force to the idea.  It ends the hymn very strongly, saving its most triumphant lines for the end, and not wasting them either, since the chorus gets repeated three times!  Interestingly, the author chooses to begin the hymn with the same lines as the chorus, which has the effect of tying the two together, like we spoke of above. 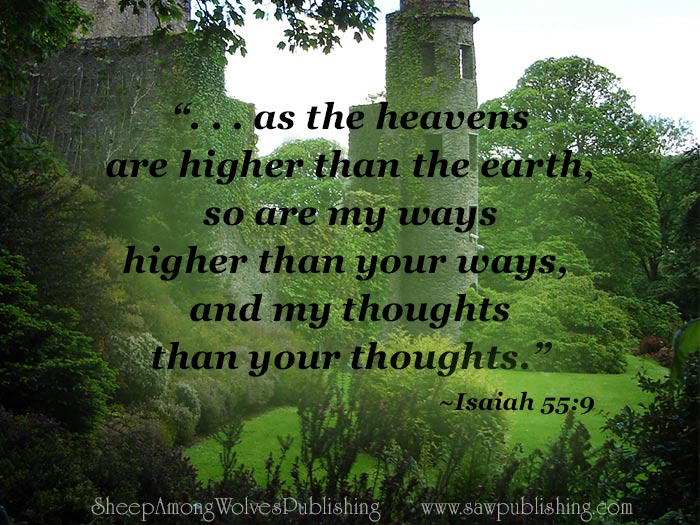 A Striking or Original Thought

If a thought, or expression of a thought, is strong enough, it will need no connection to the opening to give the reader a powerful idea to carry away.  It will have enough weight on its own to end the poem well.  We see this displayed in the hymn “God Moves in a Mysterious Way.”  Actually, the entire hymn is full of original thoughts expressed with vivid imagery.  Of course, captivating thoughts are the hallmark of a great poet, and this is certainly one of Cowper’s most outstanding pieces.  The whole poem is like an echo of “. . . as the heavens are higher than the earth, so are my ways higher than your ways, and my thoughts than your thoughts.” (Isaiah 55:9)  Listen to the closing stanza:

“Blind unbelief is sure to err,
And scan His work in vain;
God is His own interpreter,
And He will make it plain.”

Well!  There is not much more one can say, so striking and unanswerable is the poet’s last remark.  God’s ways may be mysterious, but He is His own Interpreter!  It gives the reader something to think of as they go away, and solidifies the impression they gained from the first lines, which built through various thoughts and expressions in the middle portion, and finished with unchallengeable strength in these last striking lines.

Everything hinges on the ending.  Ultimately, if you end strongly, that is what will stick with the reader.  Time and thought often need to go into those crucial last lines, in order to make them the strongest they can be.  Don’t be deceived by the idea that great poets dash off a masterpiece in an hour.  Some of the greatest poems you will ever write will take weeks or months, or sometimes even years, to complete.  This is because great thoughts take time to mature.  So take that time to be sure that your poems end strongly, because if you do, the lasting impression your reader takes away will be a good one—one that keeps them coming back to your poetry again and again.

This post may have been shared with the following linkups: The Art of Homemaking Mondays, Monday’s Musings, The Modest Mom, Homemaking Wednesdays, Wise Woman Linkup. 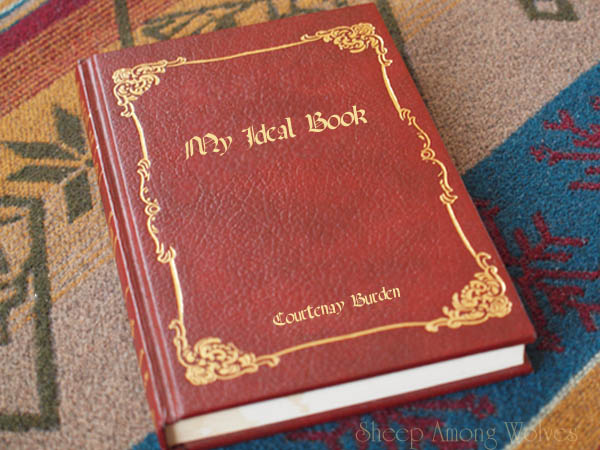