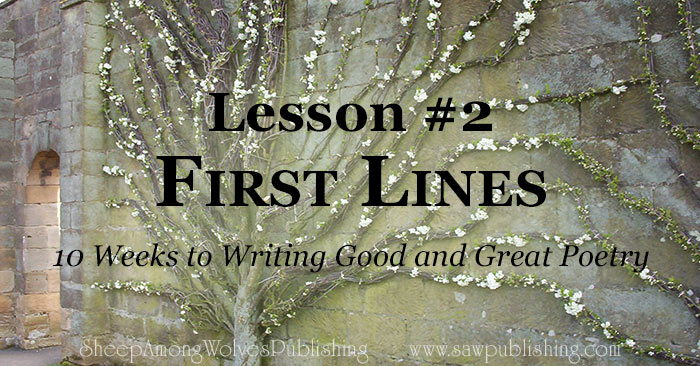 You can never make a second first impression.  That may sound rather cliché, but every cliché has a foundation in fact.  It’s very hard to undo a bad first impression, and a good first impression sticks with your audience for a long time to come.  A poem that we like from the first time we read it, has a positive power and association which are directly connected to our first impression.  That’s why first lines are some of the most important lines in the entire poem, and often dictate whether the poem is actually read at all.

Catching the Reader’s Attention . . . Or Not

Have you ever flipped through a hymnal looking for a title that caught your attention?  Perhaps before church on a Sunday morning, especially if you’re visiting a congregation who has a hymnal you’ve never seen before.  You probably don’t look at the hymn unless the title catches your interest.  And if you’ve ever noticed, most hymn titles are actually only the first line—whatever that first line might say.  There are some really good hymns which I have often overlooked, because the title was so unappealing.  “Not All the Blood of Beasts” is a good example of this.  The thought of the poem is sound and good, speaking of how Christ’s atonement accomplished what the sacrifices of the law were insufficient for.  But the first line—and consequently the title—don’t invite us to read it.

So how can we write a first line which will have the right effect on our readers?  Possibly the most important thing we can do, is first of all to think about it.  If you recognize the impact your first line will have on anyone reading your poetry, you will be more careful about what it says.  This spring I made my first attempt at writing a hymn, and I thought about the importance of the first line as I was writing it.  I didn’t want to ruin whatever I had to say, by giving it a title which didn’t engage the reader.  So I left the first line alone, and wrote almost the entire hymn before I decided on how to start it.  My subject was Easter, and I finally called the hymn “Ye Sons of Zion, Raise the Jubilee,” hoping that the thought I’d put into it would attract readers who wanted a triumphant Easter hymn. 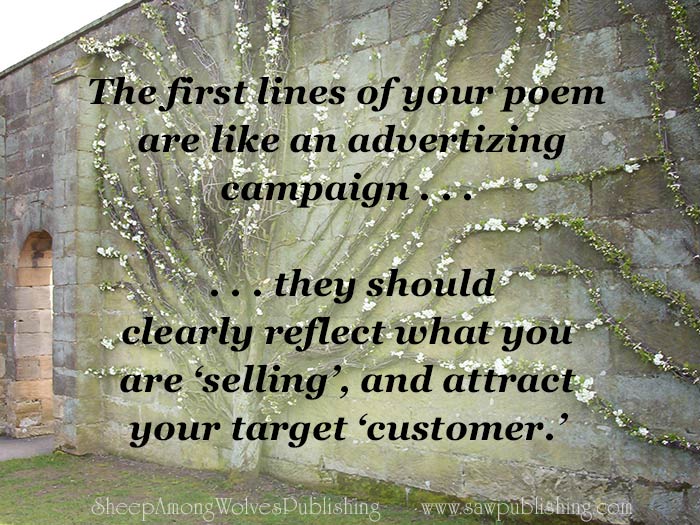 First Lines Need to Reflect the Tone of the Piece

First Lines Should Be Powerful and Intriguing

You want the reader to be so struck by your opening lines that they have to read the rest of the poem.  There are so many other poems out there, that they will likely need a line that is powerful and original to get them interested in what you have to say.  Probably, they will give you an entire stanza or two to catch their attention, but it’s best to interest them at the first line.  If you have some original or striking thought, don’t wait until the third stanza to get around to saying it, if you can reasonably say it at once.  This won’t work in all circumstances, and by no means should it take away from the strength of your ending, but it does help if your opening words are powerful.  You want the reader’s curiosity to be piqued by those lines, so that they want to know what follows.

We all know that first lines are not the entirety of a poem, nor should they be.  But they do impact the first impression on our readers, and often determine whether they read to the end, where our conclusions are drawn.  Beginning with a good first line can make a good poem great, and it certainly gives you time to reach your strong conclusion, whatever it may be.  Be encouraged to start you poems well—to put thought and effort into reflecting the tone, and creating a powerful beginning, because you never know where it may lead you.