As some of you may already know, my new book Adelaide’s Orphans made the short list of the Word Alive Press writing contest in 2014.  Sheep Among Wolves is preparing it for publication, if the Lord is willing, this spring or summer.  Over the next few months, I’m looking forward to giving you some glimpses behind the scenes of the creation of Adelaide’s Orphans.

While the setting of this book has been adapted for fiction, most of its features were inspired by real-life places.  In 2011 I had the blessing of being able to visit Northumberland, and experience England’s rugged borderland for myself. 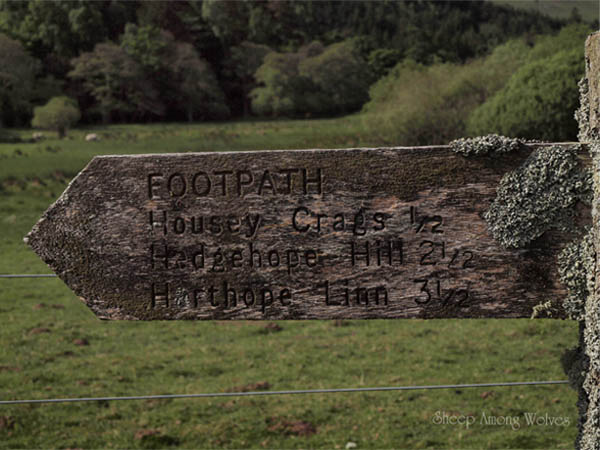 Housey Crags, which inspired the opening scene of Adelaide’s Orphans, turned out to be one of the most enjoyable outings of my trip.  I hadn’t been particularly looking forward to it beforehand, because hiking is not really something I love, and the crag was the central feature in a walking tour.  Certainly the excursion did include hiking.  We parked in a valley of the magnificent Cheviot Hills, crossed the winding road we had just turned off, and began climbing up. 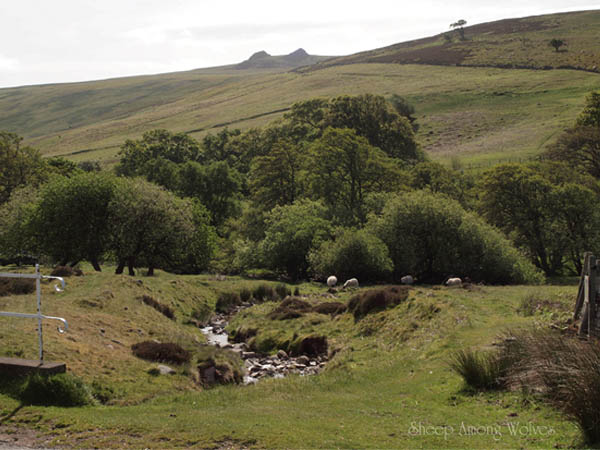 One of the most delightful things about walking in England is that the paths run right through private property—in this case, through sheep fields.  Instead of just looking at the meadows from the other side of a fence, you walk right through them.  The sheep are there, but in general they seem quite used to visitors and go on with their own occupations. 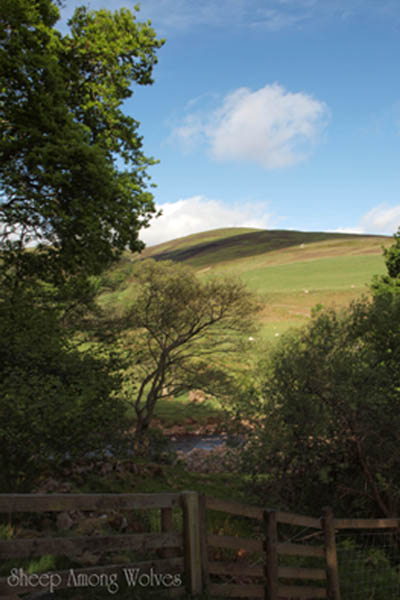 We get over a stile and into another field.  By now we are beginning to feel how high we are above the valley.  The clump of woods, with its little stream, is far beneath us.  Our van looks like a toy car in its little square of pavement.  We are in the real Northumberland hill scenery now.  The wind-tousled heights stretch out all around us, and we are now approaching our goal. 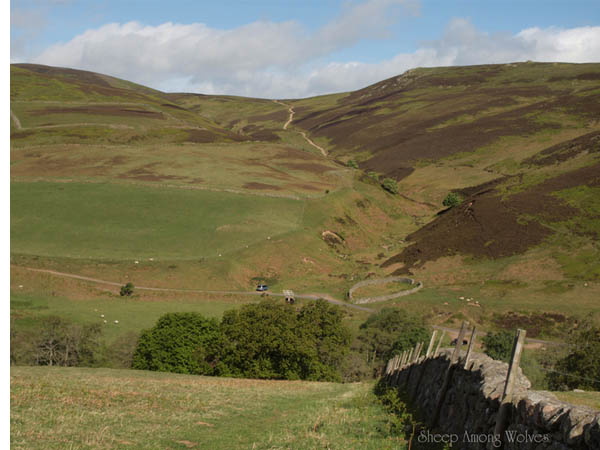 How shall I describe Housey Crags up close?  I have already tried to do it once for the book, but I fancy a great deal of ink might be expended without giving a real sense of what this remarkable geographic feature is like.  Fortunately, the photographs can supplement my words here. 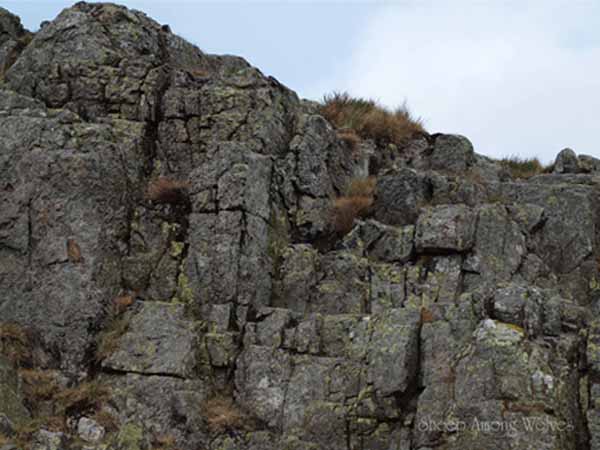 Housey Crags are a great mound of rock, sticking up from the top of the hill, wonderfully chiselled in lines, which make one think of the Flood, which I presume created them.  They do not give one the impression of having been made by man.  It is delightful rock to climb; all little steps and good footholds, constant inequalities, and no sharp edges.  In fact, the greatest danger is from the wind, which seems to be doing its best to blow us off our vantage point.  As you can see in the picture, the top of the rock is really a lot higher up than the rest of the hillside, so that one feels as if it would be very easy to blow away. 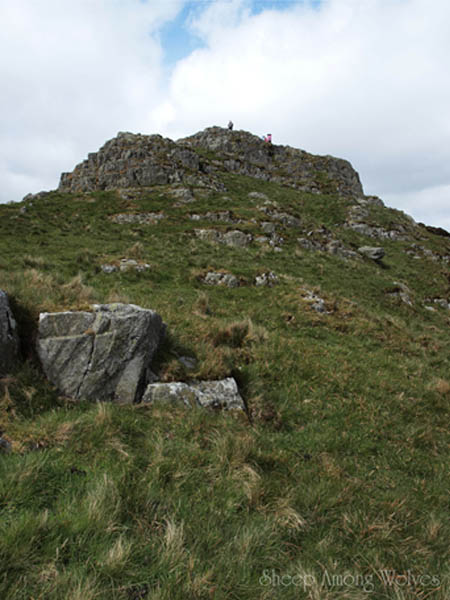 But what is this concern by the side of the exhilaration of reaching the summit?  Beneath us, stretches all around the rising, falling, rolling landscape of the Cheviot Hills.  Down at the bottom of the crag we can see the rest of our party, giving us a sense of how high up we really are.  We cling to the rock, our jackets flapping violently and our hair blowing in our eyes, but for all that, there is a sense of stillness to the world around us.  We are moving, scrambling, struggling to stay upright in the mighty wind which sweeps along the hills, but below, all is motionless.  There is scarcely a trace of humanity in sight.  And the sheep, the gorse, the silent road far down in the fold of the valley, seem all to embody the changelessness of these wild hills. 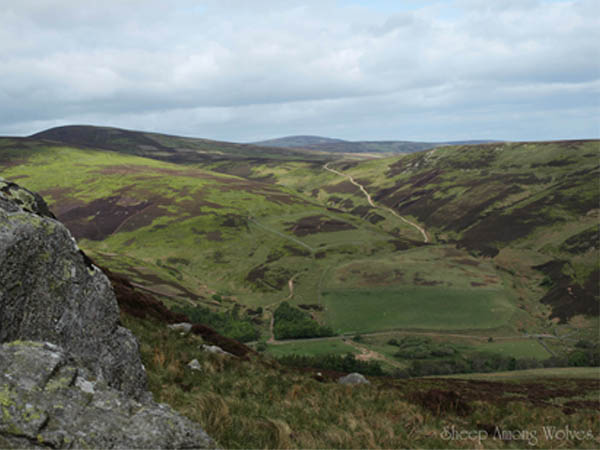 Housey Crags today are exactly the same as they were when Adelaide played there in the 1850s.  The view she looked out upon is unaltered by the century and a half which have passed.  It is unchanged from what it was three hundred, or five hundred, or perhaps even a thousand years before that.  The pastures have probably altered a little.  There are different sheep in them, of course, and I suppose the stiles have been built, or replaced, in comparatively recent times.  But the crag has stayed the same.  It has remained a huge, silent monument on the crest of the rolling hills—most likely since the day that God declared “neither shall there any more be a flood to destroy the earth.”  (Gen. 9:11) 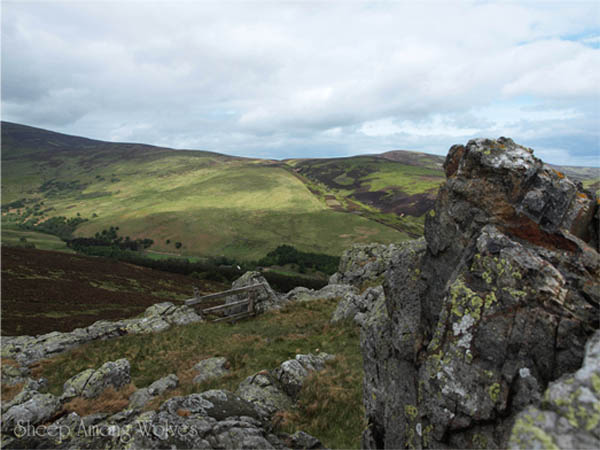 And that changelessness, the immovability of a rock which has withstood for millennia the winds which nearly swept us off—the grandeur of the massive stone outcrop, the magnitude of the Godhead of which the Rock that is Higher (Ps. 61:2) is but a type—the magnificence of this scene, untouched by the changing hand of man, surely that is one of the greatest charms of the landscape in which Adelaide’s Orphans had it’s birth.